Do you feel comfortable answering questions about being trans if say your teacher/friend/stranger asked you?

I have no problem answering any questions related to me being trans. If a stranger asks if i am trans or anything related to trans i will answer them truthfully. I love to educate people on the subject and it’s also good for better understanding of us. Even if someone were to ask “did you have the surgery yet” i wouldn’t be offended. I have very few topics related to being trans i won’t talk about.

I actually already made a post about this. Other than that i haven’t really been to any doctors except for acne medication. The earliest one after that is probably going to be with an endocrinologist to get my hormones. That one should take place in a few months (hopefully sooner than later).

Who is your favorite LGBT actor/musician/director/artist etc and why? 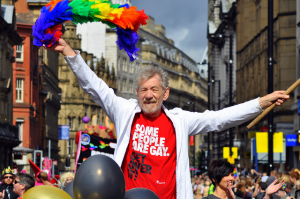 Ian mckellen is my favorite gay actor. He was really great as gandalf and magneto. I also admire his “I don’t give a shit” attitude when it comes to gay stuff or when he’s on a pride parade. Usually wearing pink like a boss (but not seen in the pic).

As for my favorite LGBT musician, it’s macklemore. He’s not actually gay, i know, but he’s a good ally to the LGBT community. I love his song “same love” and i think it’s pretty brave to sing about something like that in the music industry. Also some of the lyrics he sings about in the song could also be applied to trans people. “And i can’t change, even if i tried, even if i wanted to”. This is a remix of it, but you get the general idea 😉 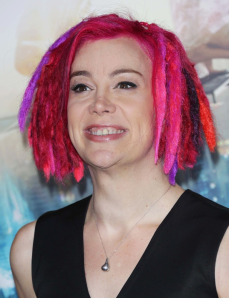 My favorite LGBT director and also a fellow transwoman, is Lana Wachowski. She’s known for directing the Matrix triology, Cloud Atlas and V for Vendetta. Especially in the movie industry transitioning is a very bold move, most studios don’t like anything that is different from the norm. Also rocking that pink hair seems like a big “fuck you” to whoever thinks of everyone that is different as weird people.

What stereotypes are put on trans people?

Keira has already talked about this, but yeah we’re often clumped together with transvestites and people who do drag. Most of society has no idea what the difference is or if there even is a difference. Also people think we’re on the extreme ends of femininity or masculinity. To be honest, i didn’t paint my room pink and wear frilly pink dresses all the time.

Do you feel being trans holds you back from your career choice?

Not at all. I study Media and Communications and it’s mainly a female oriented field. You can even see it at my college, 80% of students is female. The specific thing i want to do is a bit more male oriented though. You don’t see females editing videos, filming or doing general behind the scenes stuff that often. Even if it doesn’t work out, i could always become a reporter or work at the editorial office, which i am trained for too.

I think i’d be pretty interesting to hire though, as i can give views on both genders without a lot of guesswork. That could be useful when making tv programs or writing an article in a magazine.

I’ll be going on vacation with my parents next week. This means the 30 day trans challenge will take a little break and resume after i come back.

One thing is special about this vacation though, as i’ll be going as a girl. I think it’s a good excercise for me to see what it’s like to be out and about as a girl for a few days in a row. Essentially it’s a small test for me before going fulltime. There are still some things i’m afraid to do as a girl though, very much related to my male body.

Firstly, i’ll still have to use my male voice when ordering food because my female voice ain’t very good. My mom offered to do the food ordering for me but i want to do this to overcome that fear. I’ll probably be using my male voice a whole lot more in the next 6 months or so, i hate being a mute. The other thing is swimming. I’ll either have to get dressed as a guy if i want to swim or not swim at all.

Those are just the little things i worry about, but i’m confident that i can handle it. Now i’ll just have to decide what to wear that week 😎 .

You’ll probably see a few posts about it here when i come back.

Your views on the cis-gendered community?

I don’t know who made up these questions, but this one makes no sense either. Cis-gendered people are not part of a community, they just are who they are. As for answering the question, i don’t mind at all if someone is cis. I don’t have tumblr-esque views on them like i should hate them because they’re “normal”. The only thing i would like to see from them is more acceptance for trans people. And that gender is not black and white anymore, there is a grey area now too.

Do you want to be a parent, why or why not?

I want to be a parent one day, yeah. Sadly enough i will never be able to experience pregnancy and i don’t think science will progress to that point in my lifetime. I don’t really care about having genetic children of my own (as a male) because of this. Population is rising higher and higher so i’d rather adopt a kid than to freeze sperm and have a surrogate baby.

My parents have asked me a few times to bank sperm though, just in case. My genetics are nothing special (apart from one webbed toe) so i don’t feel the need to. My two brothers can give them all the genetic children they want. I imagine that if i was an only child, this would be much harder on my parents.

I’d love to have a (adopted) daughter one day. I want to learn her all the girly things and stuff and have a good mother-daughter relationship like the one my mom and i are building now. I think i’d be a good mother, i’m caring, good with children and will have enough interesting experiences to share with them. A son would be fine too, since i can relate pretty well to what a boy goes through up until their twenties. Only the period talk with my future daughter is going to be a little bit awkward i think ;).

If you’re religious how do your views effect being trans? If you’re not religious what about your family religions?

I’m not religious anymore. I used to believe when i was a young child but that changed after i found out god wasn’t there for me. I prayed for months on end to wake up as a girl but that never happened so i stopped believing. I’m kind of an atheist now.

My parents (and the rest of the family) are catholic. My parents don’t see me as a mistake god made, they say if god wanted me to be this way then so it is. And that god could have decided that i could “flourish” better as a female, which is why he decided i should be that way later in life.

My parents always let me free to believe in whatever i wanted, but did want me to know biblical values like care for eachother, be honest, respect and forgive others. I think those values also played a big role to accepting me as trans when i came out. They are a big fan of “love eachother no matter what”, which i think is a big reason that they still love me, even if i want to change.

My extended family is also catholic. They are quite the bit more extreme in their beliefs than my parents. I fear ever coming out to them, i’d probably be a sinner or have demons inside me. So yeah i don’t plan to come out to them anytime soon.

How do you feel about the trans laws where you live?

We don’t really have many specific trans laws in this country. The most recent one i can think of is that you can change your name now without having to have had SRS. You still do need the letter from the gender clinic stating you have gender dysphoria though. So yeah when i get my letter in a few months, i’ll be changing my name to Naomi ASAP.

Other than that, employers can’t fire or not hire me just for being trans. The law states that i have the same chances of getting a job as similarly skilled people.

That’s all the laws i can think of right now. I feel there could be more laws that help us though.